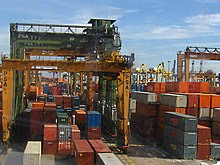 The first Container Convention was produced in 1956 in Geneva for members of the Economic Commission for Europe and was extended in 1972 in Geneva to worldwide application . The new Convention is administrated by the Customs Co-operation council .

Its purpose is to facilitate the use of Containers in International Traffic . The contracting parties grant free temporary admission to containers subject to re-exportation when they are ;

-----  imported loaded to be re-exported empty or loaded

Containers have to be approved in compliance with technical conditions concerning construction and closing systems , including ;

-----  external marking with owner's name and address , tare and identification ;

-----  they have to be capable to simple and effective sealing ;

-----  it must not be possible to introduce or remove any goods without breaking the seal or leaving traces of tampering .

-----  they must be readily accessible for Customs inspection ; a certificate of approval must be displayed on the outside ;

Approval must by one contracting party should be accepted by other contracting parties  . There is a right to refuse to recognize the approval of containers found not to meet the prescribed conditions , but traffic is not to be delayed only on account of minor defect when there is no risk to smuggling .

A period of 3 months temporary admission is allowed , but this can be extended if circumstances justify it .

Provision is made for damaged containers to remain in  the country provided :

-----  duty is paid on the value of the container taking its condition into account ;

-----  it is destroyed under supervision at the owner's expense , and duty paid on the scrape value if any component parts imported for the repair of damages containers are admitted free to duty .