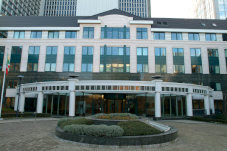 Early attempts by customs co- operations council to make a systematic approach to harmonization of customs procedures were swamped by the large number of proposals and requests received member states and from other international organizations seeking solutions to isolated but urgent customs problem . The council gradually recognized the need for an international instrument which would have a broad scope and which would provide countries with a comprehensive coherent guide for use in the simplification and harmonization of their customs legislation . The draft convention aroused the interest both of members and non members state , as well as other international organizations and specialized agencies of United Nations . UNCTAD , for example  , participated in the work both in its own right and on behalf of developing countries which were not member of the council , International organization such as  ICAO , IMCO , and the  ICC  took an active part in the work .

The International Convention on the Simplification and Harmonization of Customs procedures (revised Kyoto Convention or RKC) was originally adopted in 1974 and was subsequently revised in 1999; the revised Kyoto Convention came into force in 2006. The RKC comprises several key governing principles: transparency and predictability of customs controls; standardization and simplification of the goods declaration and supporting documents; simplified procedures for authorized persons; maximum use of information technology; minimum necessary customs control to ensure compliance with regulations; use of risk management and audit based controls; coordinated interventions with other border agencies; and a partnership with the trade. It promotes trade facilitation and effective controls through its legal provisions that detail the application of simple yet efficient procedures and also contains new and obligatory rules for its application. The WCO revised Kyoto Convention is sometimes confused with the Kyoto Protocol, which is a protocol to the United Nations Framework Convention on Climate Change (UNFCCC or FCCC).

Simpler formalities and procedures are also less costly to the customs since they are easier to administer . With many formalities and complicated procedures effective delegation of power is more difficult because there are frequently problems which require decisions at head office level . The resultant frequent consultation between officials and officers causes an economic use of the resources available . Simpler procedures facilitate the training of officials and are more easily adapted for the use of office machines .
Ajit Mishra (CMILT)
Ajit Kumar Mishra, CMILT, is a consultant of education, career and business solution in the field of logistics & supply chain. He is working online with his website "Join Study" across the world having students and clients globally. Join Study is the consultancy for education, career and business solution in the field of logistics & supply chain under his sole proprietorship. Mr. Mishra is a chartered supply chain analyst and dedicated himself for skill development of logistics & supply chain professionals. He is also working as educational associate and faculty member of some management institutions and colleges.